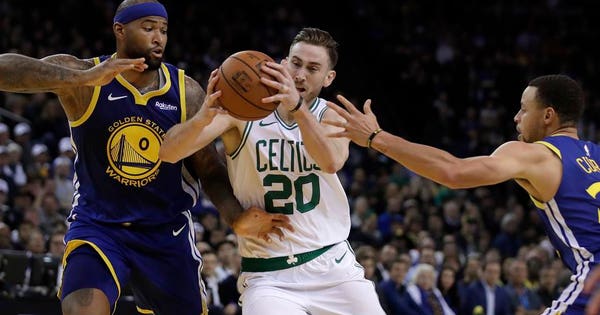 At this point, it’s probably time to stop trying to make any sort of statement about the Boston Celtics and their “identity.” After going through their roughest stretch of the season, where their on-the-court and off-the-court issues became too much for even the most optimistic diehard fans to overlook, the Celtics pulled off impressive back-to-back victories that revealed what kind of team this could be if all its independent parts started working together. A reason for optimism? Perhaps, but at this point, it’s just time to accept that nobody knows where this season is heading, least of all the Celtics themselves.

After losing seven of their previous ten games, the Celtics came into Oracle Arena on Tuesday with everybody expecting the beatdown loss that would officially put an end to the illusion of them being legitimate contenders this season. What happened was indeed a beatdown, but one where the Golden State Warriors found themselves on the wrong end of a 128-95 Boston victory. The next night, they beat the Sacramento Kings on a Gordon Hayward buzzer-beater. They improved their record to 40-26, a game and a half behind the Philadelphia 76ers for 4th place in the Eastern Conference.

It was an impressive two-game stretch, but let’s not keep making the mistake of believing that the Celtics are “figuring things out.” At this, it’s time to say that it’s only been two games. One could have been a fluke, them having their best night at a time when the Warriors were at their lowest point. The second night was yet another game where they won without Kyrie Irving, who they seem to manage to play well without even though the numbers don’t quite back that up. Again, none of this makes any sense whatsoever, but nothing has made much sense this season for the Green Team.

If there’s one main story about the 2018-19 Celtics it’s that they have been the model of inconsistency. At this point, we just have to stop saying that anything has happened in the last few games will carry over into the next few games, let alone the remainder of the regular season or into the playoffs. This is just going to be a weird season. It wouldn’t be shocking if they get swept in the first round or if they somehow managed to beat whoever manages to emerge out of the West in the NBA Finals (and who knows, after Wednesday, it’s possible to start doubting that it’s going to be Golden State). It would be nice to believe that this team has suddenly found a way to move past their clear stretches of dysfunction and become the Avengers, but they are always going to end up being the Doom Patrol.

Whatever ends up happening, it’s clear that it’s that this version of the Celtics isn’t built to last. There’s just something off about the roster. In all likelihood, there are going to be big changes that happen over the offseason. It’s hard to know whether Irving will stick with the team or not when he inevitably opts out of his current contract (at the moment, it’s probably a coin-flip). Al Horford could also opt out, although that’s probably less likely considering that he’s due to earn $30.1 million. There’s the chance that the Celtics could make a serious run at trading for Anthony Davis, which would mean parting ways with at the very least Jaylen Brown and possibly Jayson Tatum, among others. Marcus Morris, having one of the most Jekyll-and-Hyde seasons in recent memory, will be an unrestricted free agent and Terry Rozier, whose season has been almost exclusively “Hyde,” will be a restricted one. This is without even getting into questions surrounding the draft. The next version of the Celtics will be quite different from this particular collection of talent, and that might end up being for the best.

That means it’s time to read too much into this Celtics team and just appreciate it for what it currently is, one of the strangest and unpredictable ones in recent NBA memory. The Celtics will face the Los Angeles Lakers on Saturday, and fans should be encouraged that they, unlike their historical rivals, will at least have the chance to extend their brand of basketball chaos into the postseason.