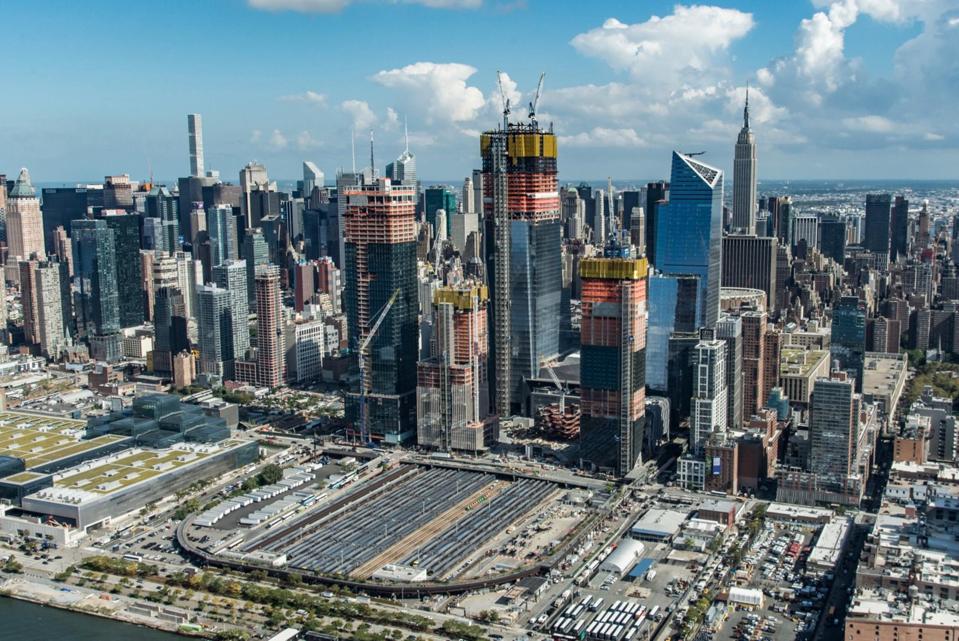 With $40.8 billion worth of construction starts tallied last year, the New York City metropolitan area, which includes the five boroughs and the surrounding suburbs, once again had the most new construction spending of any metro area. Hudson Yards, the massive real estate development that opened in Manhattan today, is an emblem of, and a recent force behind, New York’s three-decade construction hot streak.

The largest project started in New York in 2018 was an office tower known as The Spiral that’s expected to cost $1.77 billion to build. The 65-story building, which will be enveloped in a series of tree-laden terraces, is adjacent to the main Hudson Yards development. It’s scheduled for completion in 2022.

Thanks in part to projects like this, New York held on to its top construction starts ranking by a wide margin. That’s despite a 13% decline in construction starts from 2017. The decline is not a sign of a weakening market but rather a reminder that the prior year was exceptional, explains Robert Murray, chief economist at industry data provider Dodge Data & Analytics, who ran the numbers for Forbes.

In 2017, Murray points out, work began on huge institutional projects like the renovations at New York’s LaGuardia Airport, the Javits convention center and Penn Station. A slowdown in 2018 was inevitable.

That sense of transition was a theme across the country in 2018. Construction began on $606.3 billion worth of U.S. real estate, a 2% increase from the year prior. Although modest, the increase was stronger than expected. Better-than-hoped employment growth in particular—with 2.6 million jobs added nationally—led to rent growth and low vacancy rates, supporting a final gasp of a seven-year construction expansion that is unlikely to survive 2019.

“We’re in the midst of a maturing expansion,” Murray says. “This expansion has in many ways played out like past expansions. It was led by housing, in this case multifamily housing. The next area of growth was commercial building, and then it was followed by institutional building.”

In other words, big institutional projects tend to signal an expansion is nearing its end. And over the last two years, many of the largest projects in the country have been institutional.

Today, projects of all types mostly amount to building frames or holes in the ground. As demonstrated by Hudson Yards, where construction began in 2012, construction starts to bring big change to neighborhoods and skylines over time.

Our list tallies the dollar value of construction starts (breaking ground and beginning work) for single- and multifamily homes, office, retail, warehouses, healthcare facilities, educational buildings, manufacturing plants and research facilities, among others. It does not include money spent on public works projects such as bridges, streets, parks or utilities. Dodge Data defines a project’s total value as the cost to build a project at the time that construction begins, not including land value or the cost of acquisition.

Check in, smoke up and tune out: Cannabis-friendly vacation rentals are catching on
In N.Y. Attorney General’s Trump Complaint, Lots Of Fraud But Not A Lot Of Tax Avoidance
3 Ways To Build A Home-Based Side Hustle That Helps You Beat Today’s Inflation Worries
Kim Kardashian Buys Cindy Crawford’s Former Malibu Oceanside Home For $70.4 Million
Stocks making the biggest moves midday: FedEx, Boeing, Ally, Domino’s and more