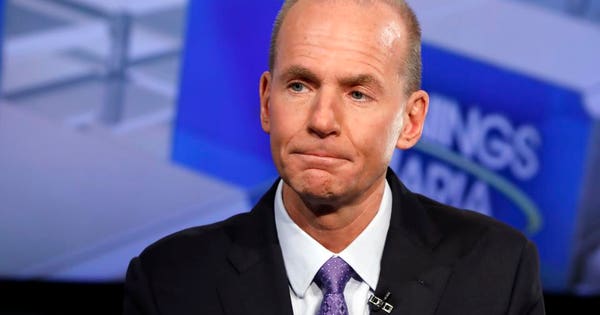 Since an Ethiopian Airlines Boeing 737 Max jet crashed last weekend, Boeing pensioners, many of whom retired with large holdings of Boeing stock, have been asking me whether they should sell. While it’s uncomfortable to talk about the investment implications of a tragedy like this, for all those who are desperately wondering what to do, I turned to Wayne Himelsein, one of my managers, for guidance because his quantitative approach takes emotions out of the equation.

Ken Kam: Wayne, many Boeing retirees have large holdings of Boeing stock and after reading my articles about GE retirees and pensioners, they wonder if they are about to go down the same path.

Wayne Himelsein: I think they have good reason to worry. There is tremendous uncertainty, more so ambiguity, of the outcome. If in fact there is a problem with the Boeing 737 Max jet, the resulting recalls and lawsuits could be worse for Boeing shareholders than GE’s problems have been for their retirees and shareholders.

Kam: So how do you even begin to evaluate a position with such a wide spectrum of possible outcomes? This seems less a quantitative measure, which is how you tend to assess stocks.

Himelsein: You are definitely right about my style of measurement, but as much as this seems like a giant judgment call, there is actually some quantitative analysis one can do to sharpen the estimate.

High level, the major underlying premise of all quantitative analysis is that in viewing price behavior, one is actually viewing the consensus opinion of all market participants. Every single one of the individual buy/sell decisions, and reasons for those decisions, aggregate to price movement, and therefore, can tell us something about mass consensus.

More interestingly, there has even been shown to be a resulting “mass behavior” that emerges, where the group behaves, to a degree, with more insight than the sum of individuals. The whole is greater than the sum of the parts.

Kam: You’re saying that even in areas of tremendous variability, the crowd behavior can reveal insight?

Himelsein: Precisely. In fact, one of the grandfathers of markets, John Maynard Keynes, famously described stocks as a “beauty contest,” wherein they should be evaluated not on what people think they are worth (their fundamental value), but rather on what we think everyone else thinks they’re worth!

Conceptually, it does not matter how good your own analysis is, if the market disagrees, you lose. But when we use our powers of observation to anticipate what “the rest” believe, we stand a better chance of winning. Amazingly, we actually see this being the case when the emergent phenomenon of momentum occurs. Stocks with momentum will trend far longer than most would assume. The beauty contest winners are adored far after the contest ends.

Kam: I like that way of thinking. So what does your view of the mass consensus tell you about Boeing?

Himelsein: What we immediately see, in looking at the price behavior, aka market participants en mass, is that Boeing is not likely to collapse on the heels of this disaster. Yes, it fell a fair amount, but the highlight is how it hit the brakes, how the fall was halted in such a specific and well-defined location.

In Oct 2016, Boeing broke out into a powerful trend after spending many years doing not so much. It ran aggressively, more than doubling over the course of the next year and change, to eventually form a ceiling around Jan of 2018. I say a ceiling because the early 2018 level was not really broken until Feb of 2019, when it leaped to new heights after just over a year of moving sideways, aka consolidating.

Kam: I see that Boeing took off to new heights in February. Before the disaster hit, it looked like it was heading straight up and not looking back. But what now?

Himelsein: What we see at the moment of disaster is a large gap down, a far lower price that gave nobody time to exit their position, or to even consider what to do next. But it stopped, on a profoundly perfect dime; the ceiling of the year 2018.

In other words, the ceiling that we had all become well accustomed to over the prior year as marking the end of the prior aggressive run, the ceiling that we may have gotten frustrated with during more than a year-long wait to see if the stock would rise further, now became the floor. The consolidation held.

Kam: That is definitely interesting. As bad as the disaster felt for Boeing, the stock still went to a comfortable spot, and not further. What do you make of this?

Himelsein: It’s not necessarily what I make of it, it’s what the crowd has made of it. The votes are in, and the consensus is not overwhelmingly concerned with the future of Boeing. And I, a single market participant, humbled by the mass of the crowd, see that confidence. I conclude that Boeing, at this comfortable level, is a buying opportunity.

What the consensus seems to believe is a positive on both sides of the coin; if Boeing is not at fault for any mistakes in the build of their new plane, and it is mere coincidence, the stock will likely explode to the upside, reaching the sky faster than their own jumbo jets.

And if turns out that it is some fault of their design or build, the consensus is that the repercussions are manageable. That Boeing can fix and move on, more so, can handle the backlash.

If there were more fear, the stock would show it. Of course, anything can happen, and this is certainly more of an unknown than many other clear cut picks, but as a betting man, leaning on favorable odds, I’d get on board Boeing before the doors close and it takes off.

My Take: If Boeing is more than 10% of your portfolio, it is more than any of my managers, including Wayne, would recommend. However, given Wayne’s analysis, I don’t think there is an urgent need to sell at this time.

If you have enough to live on comfortably without your Boeing stock, then you can afford to maintain an oversized position in its shares — though I don’t recommend it.

If your retirement depends on Boeing turning around, it’s time to consider making some changes.

Wayne Himelsein’s Logica Focus Fund (LFF) has an 18+ year track record that extends through 2 market crashes, numerous corrections, and sector rotations. Over that period, Wayne’s model averaged 11.86% a year which compares well to the S&P 500’s 5.79% return for the same period.