Most people are all too familiar with the latte factor – the idea that if you eliminate your $5-a-day coffee habit (or green juice serving or any other unnecessary daily expense), you could accumulate a lot of money over time, especially if you use that money to invest.

In fact, Americans could save $5,339.35 a year, on average, by cutting out some discretionary spending, according to a new report.

That’s how much individuals are spending on non-necessities such as coffee, eating out, entertainment, clothing, ride shares and alcohol, GoBankingRates found.

Although the costs vary widely across the country, takeout and food delivery alone amounted to more than $2,000 a year, on average, the personal finance site said, while buying coffee on the go added up to more than $700 annually. New clothing and accessories accounted for roughly $750. Ride shares, such as Uber and Lyft, also put a substantial strain on many people’s wallets, costing Americans an average of close to $1,000 a year.

Other expenses, including concert tickets and alcohol, each added up to around $350 a year, on average.

When broken down by age group, millennials spent more than every other generation overall, particularly on clothing and eating out. For them there is the most to gain by beginning to budget, GoBankingRates found. (See the chart below for a breakdown of daily spending by each generation.) 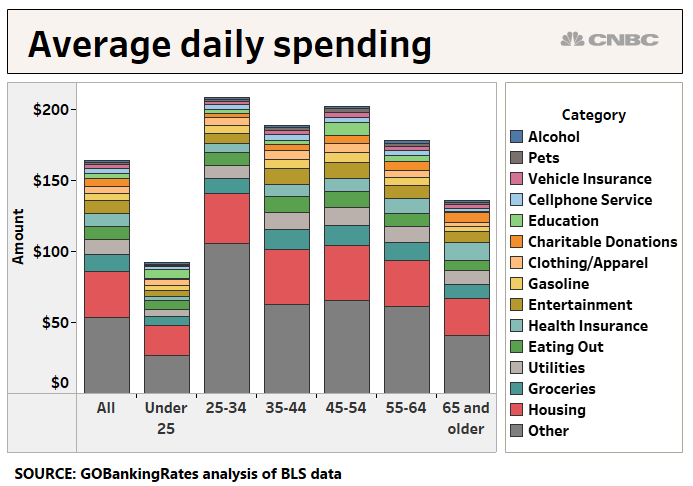 Of course, Americans shell out the most money on spending that is, in fact, necessary, such as housing, groceries, utilities and health insurance, GoBankingRates found.

Yet nonessential expenditures often eat up whatever is left, and then some, to the detriment of retirement savings and other long-term goals.

Considering that many families spend more than 100 percent of their income after taxes on monthly expenses alone, cutting those extra costs is the key to accumulating any sort of savings.

More from Fixed Income Strategies:
A happy retirement is more than just money
More investors stock up on non-traditional bonds, strategies
Your spending may fluctuate wildly in retirement

For example, if you saved about $3 a day, or $100 a month, in a high-yield savings account for 30 years, that would amount to nearly $50,000, assuming a 2 percent return, according to Mark Avallone, president of Potomac Wealth Advisors and author of “Countdown to Financial Freedom.”

Alternatively, if $100 a month — roughly the amount spent on coffee and concert tickets — was invested in the stock market, hypothetically that could amount to $122,700 over the same time period, assuming a 7 percent rate of return.

GoBankingRates polled over 1,000 adults in December.