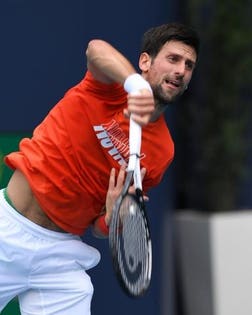 With the Miami Open tennis championships currently underway at the Hard Rock Stadium, some of the players competing in the tournament won’t have far to travel. Indeed, Southern Florida is a mecca for professional tennis players, many of whom own luxury homes in the area, from Miami Beach to Palm Beach.

Novak Djokovic, the top ranked player in the men’s singles main draw (for the fifth time at the Miami Open) is widely considered to be one of the greatest tennis players of all time. The 31-year-old Serbian pro, who has won the Miami Open’s men’s singles title six times, owns a luxury 3-bedroom, 3.5 bath condominium at Eighty Seven Park, the luxury boutique building designed by Renzo Piano, the Pritzker Prize-winning architect.

Located in Miami Beach the development is adjacent next to a 35-acre city park. The eco-conscious and elegantly designed glass tower offers unobstructed park and ocean views and features sweeping wrap-around terraces. With just 66 residences, the building will offers an unmatched level of service including white-glove concierge, spa with a hammam and brain fitness sessions and a private residents park.

A 12,410 square foot penthouse recently for sale in the building was listed for a whopping $68 million.

Serena Williams bought this 5,842 square foot home in Palm Beach Gardens in 2015 where she lives with her husband, Alexis Ohanian, and young daughter.Courtesy of Landmark Realty Professionals

Serena Williams, the 10th seeded player in the women’s singles draw, bought a 5,842 square foot home in Palm Beach Gardens in 2015 where she lives with her husband, Alexis Ohanian, and young daughter. The home features five bedrooms, six and a half bathrooms, an in-ground swimming pool, summer kitchen, built-in grill, and a covered patio. The home was listed for $2.5 million.

Previously, the tennis star co-owned a home, also in Palm Beach Gardens, with her sister, Venus, a three-time Miami Open champion. The home, which features 6 beds and 7.5 baths with separate master suites, was recently listed for $2.695 million.

Located at BallenIsles Country Club,  the home features bright open spaces, luxurious amenities including a media room, library, home gym, home theater and a juice bar. Outside, there is a resort-style swimming pool and spa.

Located off the coast of Miami, Florida and a stone’s throw across the water from South Beach, Fisher Island is a little-known island which used to be the home of a branch of the storied Vanderbilt family. The island is accessible only via the island’s own auto-ferry system or by private yacht.

Wozniacki can be found practicing at its globally ranked tennis facility that features eighteen courts including both grass and hard-courts to clay courts. The island also has an exclusive country club and golf course. Wozniacki is the 13th ranked seeded player in the women’s draw of the tournament.

This waterfront Miami Beach mansion that was once owned by professional tennis player, Anna Kournikova, is on the market for $13.5 million.Jorge Uribe/ONE Sotheby’s

The tennis star and her musician-husband, Enrique Iglesias, built a luxury estate in the private Bay Point neighborhood which boasts six bedrooms and six and a half baths. The two-story home, which is currently on the market for $4.6 million, features a spacious master suite, high-end finishes and custom built cabinetry and the backyard features a wraparound terrace with a summer kitchen, lush grassy fields, and a luxe pool.

A waterfront mansion in Miami Beach (seen above) that was once owned by the former professional tennis player (seen above) is currently listed for $13.5 million. Located on Lake Avenue, the mansion has eight bedrooms and eight bathrooms. There is also a two-story guest house that overlooks the pool and an additional guest house with kitchenette and service quarters. The home also offers expansive water views of Sunset Lake and has 156 feet of water frontage plus its own dock that can accommodate a yacht up to 100 feet in length.

The home is listed under ONE Sotheby’s Senior Vice President, Jorge Uribe. (Click here to see our feature on the waterfront mansion).

Trump-linked Digital World Acquisition Corp shares are now around $16 after hitting $97 earlier this year
As 30-year mortgage rates hit 6.7%, homebuyers are facing ‘payment shock.’ Here are ways to save
Check in, smoke up and tune out: Cannabis-friendly vacation rentals are catching on
Inside the $250 million penthouse on ‘Billionaires’ Row’
Palantir CEO Alex Karp says this deadly tidal wave of macroeconomic risks will wipe out some companies