The recent college admissions scandal underscores how difficult it can be for middle- and low-income students to get their foot in the door at elite institutions.

“It is not a level playing field, even without cheating,” said Mark Kantrowitz, publisher of SavingForCollege.com.

Less than 5 percent of students with parents in the bottom 20 percent of income distribution attend Ivy League and other elite colleges, compared with more than 14 percent from the top 1 percent.

The data comes from a report titled, Mobility Report Cards: The Role of Colleges in Intergenerational Mobility, by researchers at Stanford University, Brown University, University of California, Berkeley and the U.S. Treasury Department. 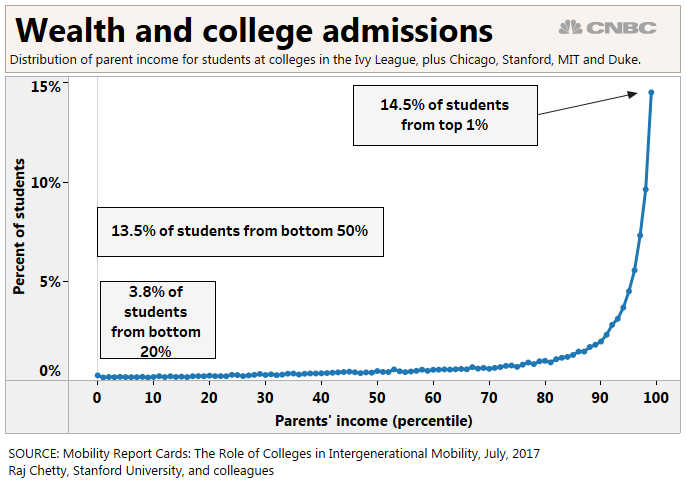 In a recent blog post, Richard V. Reeves, director of the Future of the Middle Class Initiative at the Brookings Institution, a Washington-based think tank, wrote that the recent scandal, “simply shines a light on how the whole college admissions game is rigged in favor of those with cash, connections or both.”

Children from wealthier families benefit from a whole range of advantages when it comes to getting into college, said Elaine Griffin Rubin, senior contributor and communications specialist at financial aid site Edvisors.

“These children tend to have lived a life where they were provided with the best of education and experiences to prepare them to stand out to colleges,” Griffin Rubin said. “And when accepted, that family will have the resources to pay for that education.” 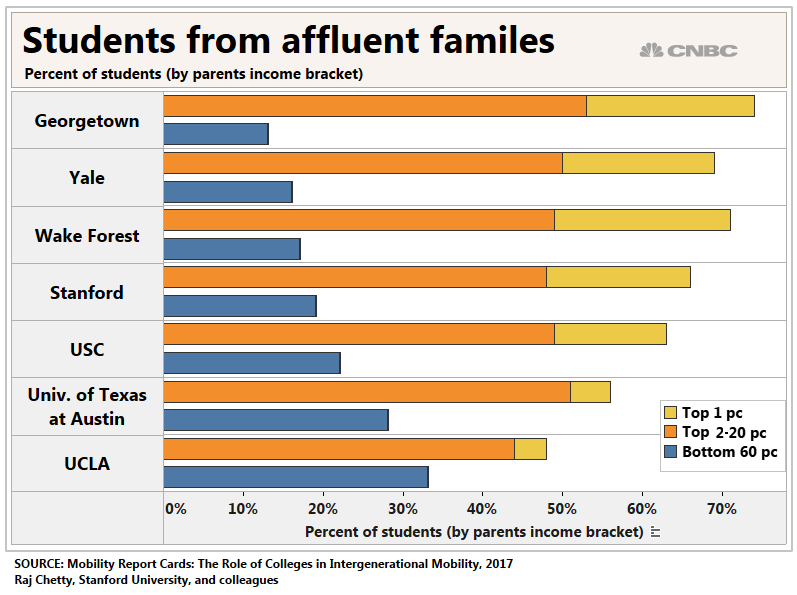 Another problem is that elite institutions tend not to recruit in low-income neighborhoods, noted Kantrowitz.

Despite the problems, students should still try to get into the schools of their dreams, Griffin Rubin said.

“But understand that the acceptance or denial of admissions should not impact your character,” she said.

More from Personal Finance:
Older Americans planning to downsize should brace for sticker shock
Here’s how the Fed rate hike will affect your finances
What Social Security’s budget woes mean for your retirement benefits

One-time presidential pardon will not do much to alleviate student debt crisis, economists say. These changes may be a better solution
GM to close reservations for electric Hummer pickup, SUV after topping 90,000
Are America’s Downtowns Coming Back?
Here’s everything the Federal Reserve is expected to do today
A Woman Becoming One Of The Few Presidents Of A Major Construction Company