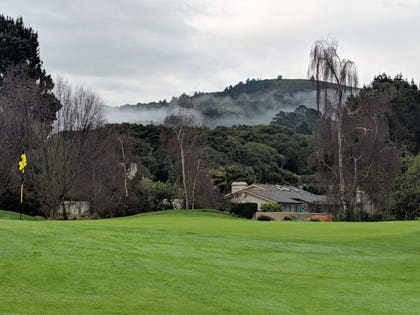 I haven’t even been in town for five minutes, and two people have already warned me that rain is in the forecast. Such is springtime in Northern California’s Monterey Bay Peninsula. With the U.S. Open coming in June to nearby Pebble Beach, I wanted to check out the area and play another course I’ve heard about for years.

Fog can roll in quickly at Quail Lodge.

Quail Lodge and Golf Club — located on what locals call the sunny side of Carmel — has been around since the 1960s. The course opened as Carmel Valley Golf & Country Club in 1964, the hotel debuted three years later. Both have been renovated in recent years. The semi-private golf course was refreshed in 2015 by architect Todd Eckenrode. The original Robert Muir Graves design now plays tougher and longer, yet has fewer yet more-penal sand traps.

The greens are immaculate.

I don’t know what it was like before the renovation, but I really enjoy how the course plays now. Because of all the rain in the region this winter, the course is in outstanding condition. Really lush and green. And the setting is serene. Surrounded by mountains and hills, the view is especially great when fog is rolling in and creates dramatic contrast. It’s nine miles from Pebble Beach, and one of about 15 courses in the immediate area. This one has a reputation of having entertained many PGA Tour pros over the years who came to play practice rounds while preparing for one tournament or another at Pebble.

There are plenty of challenging bunkers and water that come into play. Even though the greens were clearly aerated a couple of weeks before I arrived, they have grown back nicely, and were very true to the roll, with respect to speed. Fairly easy to read, too, although the undulation around some of the greens defies visual logic. They are fast, but not too much so. If you play the back tees at 6,464 yards, you may well be challenged to reach some of the par-fours in two. Even several of the par-fives are difficult to reach in three shots from the tips. That’s because the wind can pick up, and the angles you’re forced to play don’t let you take advantage of all of the distance in your bag. I also noticed that many of the steep fairway bunkers that come into play on tee shots happen to be on the right side of the fairways. That was not good news for me personally, but I welcomed the dare. There were also several holes flanked on the right side by very large hills. And every tee shot, I felt had a clear landing spot to aim for. Overall, if you avoid the bunkers — they almost guarantee you’ll need to use a lob wedge to get out of — you should be able to score well on this layout.

A fun course to play.

“The course is known for being in top shape,” says Katherine Marren, PGA director of instruction at Quail Lodge. “The greens are perpetually medium fast in speed. And the layout has the perfect balance for golfers of all abilities to enjoy. There aren’t a lot of forced carries. And it’s fun to play.”

By the way, I always give kudos to golf courses that have the savvy to include a complete wedge set in each rental club set. Quail Lodge provides four lofts in addition to a pitching wedge, in each set. And there are about a half-dozen brands to choose from, along with various flexes in either graphite or steel shafts.

I realize there a lot of upscale courses in this area, and I think this one is worth stopping by to play. Especially if you’re coming in town for the Open and have an extra half day on your hands. The course also plays pretty quick — expect about a four-hour round tops.

And if you come by, definitely stop in Edgar’s restaurant in the clubhouse. A really good menu, wide selection, and one of the best grilled chicken sandwiches I’ve ever had.

This large suite is cozy.

The adjacent hotel is a California lodge style from the era of its opening. It underwent a $28 million renovation in 2013. Each of the 90-some rooms was modified. They are very comfortable, especially the beds, and are decked out with leather couches, sitting areas, plenty of windows, skylights, and even a fireplace. Plus, all the couches pull out into a queen size bed. There’s also a well-groomed putting course throughout the property. At night, the flag sticks light up so you can have some fun contests.

I’ve been told by several people here that hotels are requiring a five- to seven-night minimum stay during the Open. Quail Lodge is no exception. So if you have the desire to come into town that week, plan on spending some extra time in the area. You’ll be happy you did.

FedEx hikes package rates, details cost cutting as demand weakens globally
Lauren Taylor Wolfe says it’s just too risky for investors to ignore ESG amid recent pushback
Ford warns investors of an extra $1 billion in supply chain costs during the third quarter
In N.Y. Attorney General’s Trump Complaint, Lots Of Fraud But Not A Lot Of Tax Avoidance
Two Retired Accountants Toured The U.S. In An RV And It Cost $209 Per Night