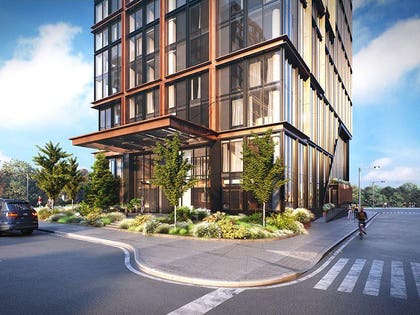 New Yorkers are being ferried around the city’s waterways more than ever, and luxury new developments are capitalizing on the trend.

Once mostly associated with commuters who braved the cold winds of winter to travel back and forth from Manhattan to Staten Island, the transit method is now one of the most popular ways to get around the entire city.

There are several branches of ferry now operating in its rivers. These include the NY Waterway and Mayor Bill de Blasio’s NYC Ferry initiative, which currently consists of 23 boats in six routes, and transports 4.6 million riders per year. That number is expected to grow to 9 million by 2023, according to the city’s Economic Development Corporation.

Eyeing the opportunity, new projects are popping up along the Brooklyn, Queens and New Jersey waterfronts, with vacancies being filled by seafaring pioneers choosing to forego the MTA’s subways and buses for boats. NYC Ferries are similar to mini cruise ships, complete with interior concessions that serve food and coffee, along with wine and beer.

“That buyer was planning to buy in Tribeca, and when he looked out and saw his office building across the river and realized the ferry puts him 12 minutes from his office, he changed his mind and bought in Quay Tower,” Ehrmann said, referencing the trip between Pier 6 in Brooklyn Bridge Park and Pier 11 at Wall Street. Just one unit is currently available in the 126-unit building, a 1,214-square-foot two-bedroom with a price tag of nearly $2 million.

“So that’s what the ferries are doing to transform the luxury developments along the waterfront,” Ehrmann explained. “They’re perceived as a luxury asset, however they’re only $2.75 each way.”

The Greenpoint, a mix of condos and rentals on the waterfront in Brooklyn.

Jodi Stasse, executive vice president of new developments for the brokerage Citi Habitats, noted that while affection for the ferry is still growing among lifelong New Yorkers, it’s booming for those who are newly moving to the city.

It’s becoming something of a lifestyle movement, known as “ferry culture,” evident in the smiling-faced selfies posted under hashtags like #NYCFerry and #EastRiverFerry on Instagram.

Ferry culture, along with the quick commutes the boats offer, are a major selling point for developments along the river, she agreed, including at the rental and condo project The Greenpoint.

After years of struggling to lure renters and buyers out of Manhattan, trying to convince them that the walk to the subway isn’t that bad and service isn’t that unreliable, the ability travel to work by boat has made housing on the Brooklyn and Queens side of the East River more desirable. Condos in The Greenpoint sold out fast thanks to its proximity to the ferry, and roughly 35% of its residents commute across the river for work, Stasse said.

There are still some rentals available in the 40-story tower, with prices starting at $2,606 for a studio on the listings site StreetEasy.

“When we’re marketing those properties, we’re really encouraging people to get on the ferry and just experience it,” Stasse said. “It’s really changed people’s impression of where they can live and enjoy the city.”

Avora, a condo in Weehawken, New Jersey, located near the Port Imperial terminal for the NY Waterway.

Ferry service is spreading from the western edge of Queens, around the bottom of Manhattan to Brooklyn and up the Hudson to New Jersey, where the NY Waterway is slated to reopen service in Newport, an area in Jersey City, this summer.

Dennis Kenney, a celebrity stylist and lifestyle expert who lives in Avora in Weehawken, New Jersey, said the option to commute via boat was a main reason he was willing to give up residing in Manhattan. Prices in Avora, a 184-unit condo with amenities including a waterfront pool, range from $684,000 to more than $3 million.

Kenney takes the NY Waterway ferry at Port Imperial for a quick ride to West 39th Street, where he hops in an Uber to “Good Morning America” in Times Square, or wherever else his clients are located that day.

“The [Weehawken] neighborhood in general it’s really beautiful, it’s peaceful and quiet and then in 10 minutes I’m in the heart of it all,” Kenney said. Taking the ferry is a pleasure, he added. He’s found that it’s always on schedule, and he sometimes heads to the terminal early to grab sushi, shop at the market or send dresses through UPS or the post office, located inside.

“And the view at night, now I started riding on top of the ferry, it’s priceless,” he said. “Tourists take it just for the view of the skyline – it’s spectacular.”