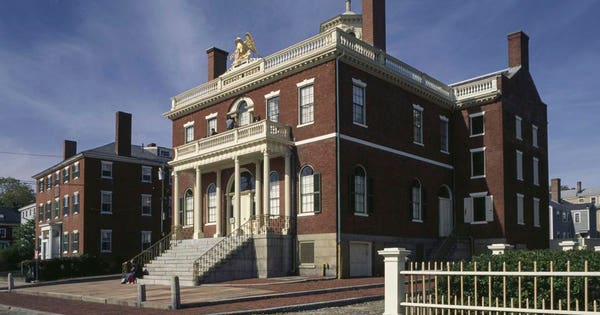 In Salem, Massachusetts, the U.S. Custom House is celebrating its bicentennial, yet another remarkable milestone for a city with an impressive legacy of preserving the built environment.

The City of Salem’s website calls itself a “small city with a big history,” and at one time, in the late eighteenth century after American independence, Salem was the sixth largest city in the young nation due to its seaport. Not surprisingly, during that time it was the richest city per capita, and today, the mansions of some of America’s first millionaires can be found in Salem.

As one of the earliest leading ports, Salem had a series of custom houses dating back to 1649, collecting tariffs for England on imported goods. With the formation of the United States Customs Service in 1789, tariffs in Salem provided a vital source of federal revenue for the country.

Built in 1819, Salem’s U.S. Custom House held the offices for Customs Service officers, and a warehouse addition at the back to store cargo for merchants and captains until they were able to pay the duties. The collector of customs, deputy collector, naval officer, surveyor, inspectors, weighers and gaugers staffed the government building and wharves. The building served in its original function as the Custom House into the 1930s.

The Custom House is part of the Salem Maritime National Historic Site established in 1938, the very first under the Historic Sites Act of 1935. Owned and operated by the National Park Service, it preserves and interprets the maritime history of New England and the United States with over nine acres of historic waterfront, a replica of a 1797 cargo ship, and historic buildings, some of which are older than the Custom House.

Salem knows what a prize it has with the Custom House as part of the national historic site, and they’re proud of the 200 years it has served in its original capacity, and as a tourist attraction and heritage education resource for local and regional studies. In honor of the bicentennial, Destination Salem, the City’s Office of Tourism and Cultural Affairs, has an artistic rendering of the Custom House on its annual Salem City Guide & Map.