Investors are shopping for retail stocks.

The XRT, an ETF that tracks the sector, is up nearly 10 percent this year, and is tracking for its best quarter since 2014. Despite the move higher, two experts said there are still bargain buys within the space.

“One name that really sticks out in retail land is Columbia Sportswear,” Ari Wald, head of technical analysis at Oppenheimer, said Thursday on CNBC’s “Trading Nation.” Last month the company reported fourth-quarter earnings that handily beat analyst expectations, leading to a nearly 16 percent surge in the stock the following day. The move higher eclipsed the $96 mark — which had previously been a key level of resistance, according to Wald — and the stock has been trading in the $100-$105 region ever since.

Wald notes that technicians call this a bullish flag pattern (so named since the vertical jump higher followed by a continuation of trading in that range can resemble a flag poll), and he believes the stock’s slight pullback this week is a buying opportunity. 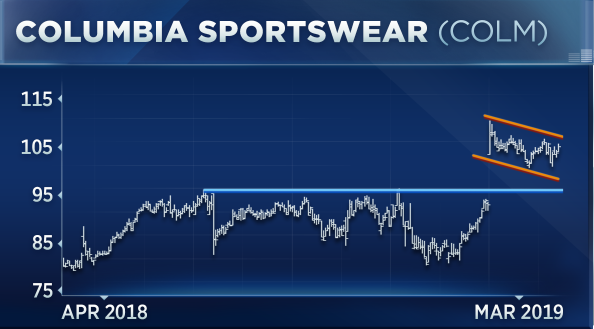 “[W]e think this little near-term pullback should be bought in anticipation for a resumption of that breakout and a longer-term uptrend that’s still in play,” he said. Shares of the sportswear maker are up roughly 25 percent this year.

While Wald likes Columbia Sportswear, he cautions on buying the sector as a whole. Retail has been “range-bound in recent months,” he said, also pointing out that “over the last five years it’s been in the same price range.” So as a result, Wald believes “there are more attractive opportunities for funds at the industry level.” 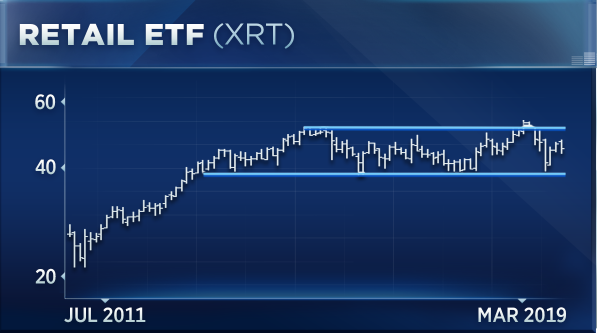 On the flip side, John Petrides, managing director and portfolio manager at Point View Wealth Management, is more optimistic on the future of retail since he believes companies recognize threats to the industry — especially the rise of e-commerce — and are changing accordingly.

“[B]y and large many of the retailers have adjusted. They’re building out their online presence, they’re cutting their square-footage growth, they’re slowing their store space store openings, so they’re living in the new world that they’re in, and they’re now able to thrive, or at least grow at a new normal,” he said.

Petrides also thinks that the economic backdrop of low unemployment coupled with wage growth will continue to spur gains for the sector.

He specifically likes Hanesbrands. The stock has been on a tear this year, soaring 41 percent, but the move higher follows a dismal 2018 that saw the name drop 40 percent. It’s still more than 20 percent away from its June 52-week high, and Petrides contends that strong fundamentals will propel it higher.

“[H]ere’s a stock that dominates the industry that it’s in. … trading at less than 10 times earnings, less than one times price to sales. Currently offers a 3.5 percent dividend yield and based on [the] company’s projections and current prices should have about a 10 percent free cash flow yield, so we think that’s an attractive stock to own in this environment,” Petrides said.

Disclosure: Point View Wealth Management and John Petrides or someone in his household own shares of Hanesbrands.

Trump-linked Digital World Acquisition Corp shares are now around $16 after hitting $97 earlier this year
Bed Bath & Beyond’s merchandise problems will make it hard to pull off a turnaround this holiday season
Here’s what the Federal Reserve’s third 75 basis point interest rate hike means for you
Set It And Don’t Forget It: Calculating Your Retirement Savings Goal
Why The Surging Dollar Is Hurting Stocks And More