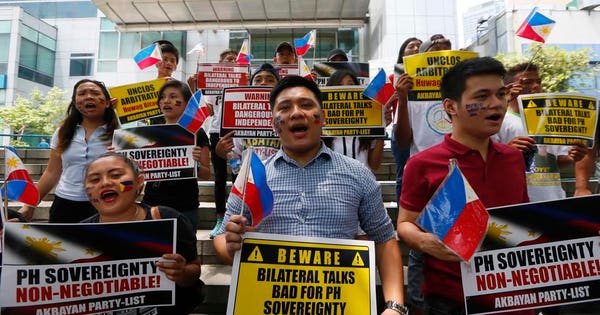 America has assured the Philippines that it would come to that nation’s defense if it comes under attack in the South China Sea.

That’s according to reports in early March, when Washington reaffirmed a defense code that Manila has sought to revise.

And it’s something that could deter China’s aggression in the South China Sea, and help ease the geopolitical risks that hang over the financial markets of the region.

America’s assurance is a policy shift experts have been advocating for quite some-time. Ely Ratner of the Center for American Security is one of them. He has been calling for America to abandon its neutrality in the region by supplementing diplomacy with military assurances.

In ‘The Stealth Superpower: How China Hid Its Global Ambitions,’ published in the January/February issue of Foreign Affairs. he says this: “It should supplement diplomacy with deterrence by warning China that if it continues, the United States will abandon its neutrality and help countries in the region defend their claims. Washington should make it clear that it can live with an uneasy stalemate in Asia—but not with Chinese hegemony.”

US and China are already in the middle of a trade war, and a growing conflict over the South China Sea makes matters worse. It adds to investor anxieties over the fate of international trade and the prospects for Philippines exports. “Duterte often stated that they will pursue an independent foreign policy,” says Nils Langgärtner, a Philippines expert with Deutsche Börse. “Exports are one of the major drivers of economic growth, especially in emerging markets Hence, cutting international ties would hurt the Philippine’s GDP growth.”

Meanwhile, America’s assurance has removed a major snag in relations between Washington and Manila; and that seems to have appeased two former Filipino officials who filed a complaint with the International Criminal Court (ICC) over China’s aggression in the disputed South China Sea.

But not President Rodrigo Duterte. He doesn’t seem to be ready for another foreign policy flip-flop – nor does he seem ready to get the country’s South China Sea Policy right: ie stick with the international law. In fact, he doesn’t see that Manila’s relations with Beijing will be spoiled by the ICC filling by the two officials.

Since he assumed office in 2016, President Duterte has flip-flopped on South China Sea disputes a couple of times.

The first one dates back to July 2016 after an international arbitration ruling, which determined that China has no historic title over the waters — and therefore cannot write its own navigation rules for the vast waterway.

It was a big victory for the Philippines, which had filed the arbitration case. And a victory for its long-time close ally the U.S., which has wanted those waterways to be an open sea.

Soon, Duterte sent a stark message to Beijing: stay away from our territory or else face the possibility of a “bloody” confrontation.

But it didn’t take long to change his mind, and side with the Philippines’ “friend” China in the dispute, and seek a “divorce” from the U.S.

Apparently, Beijing had offered Manila a couple of promises. One of them was the promise to finance Duterte’s “Build, Build, Build” initiative, which is central to its economic growth agenda.  “Duterte’s plan very much relies on China which topped the list of foreign investors in the Philippines in 2018 by far,” says Nils Langgärtner, a Philippines expert with Deutsche Börse AG. “Further, Infrastructure is critical to improve productivity, lower transportation costs, increase international competitiveness, resulting in a thriving business environment.”

And so is Chinese financing of infrastructure projects. “China has been extending assistance to the Philippines not only in terms of loans and grants for our infrastructure projects, but also in terms of benefits from numerous investments committed by Chinese enterprises,” said Carlos G. Dominguez III (Dominguez), the Philippine secretary of finance in a recent interview with Globaltimes this week.

Then there’s the promise of peace and a partnership for prosperity on Beijing’s terms.

The trouble is that making promises in high stake disputes is a hard thing to keep.

Chinese investments have been pouring slowly into the Philippines, and they end up creating jobs for Chinese rather than Filipino workers, as was discussed in a previous piece.

Meanwhile, peace on China’s terms may not serve Philippines interests, and may not save the country from war either.

Set It And Don’t Forget It: Calculating Your Retirement Savings Goal
Ford to restructure supply chain following $1 billion in unexpected quarterly costs
Car buyers pay 10% above the sticker price, on average — or more if you want a Jeep or Porsche
New retirees may face surcharges for Medicare premiums. Here’s how to appeal paying extra if your income has dropped
Magnificent Historic San Francisco Mansion Hits The Market For $12.9 Million