Lyft’s $87 opening price is a “win for the system,” even though it may have been a loss for investors that were overeager, CNBC’s Jim Cramer said Friday.

“I cannot stress this enough: we’re at the start of an IPO season that looks on track to bring a trillion dollars’ worth of companies public,” the “Mad Money” host said. “These deals will be the big story going forward.”

In Lyft’s debut on the Nasdaq, more than 6 million shares were traded at the open after more than 32 million stocks sold for $72 each in the initial offer. That’s $15 less than the opening price tag.

“I think the brokers would’ve preferred for Lyft to open at a lower level, but market orders from buyers with no discipline … ended up stretching the valuation at the open, even as the stock ultimately drifted lower, closing at $78,” he said.

Because of the high order volume, the share price could have surged as high as $100 at the opening gate, Cramer said.

But the syndicate desks released some of the buyers who had pledged to hold on to the stock to actually try to keep the stock down, so they could limit the losses for people who bought at the opening that was just unsustainable,” he said.

There’s a case to own Lyft at $80, but $5 cheaper would be even better, Cramer said.

Uber and Lyft have a 60/40 split of market share and it will be to imagine a duopoly in a raged price war, he said. 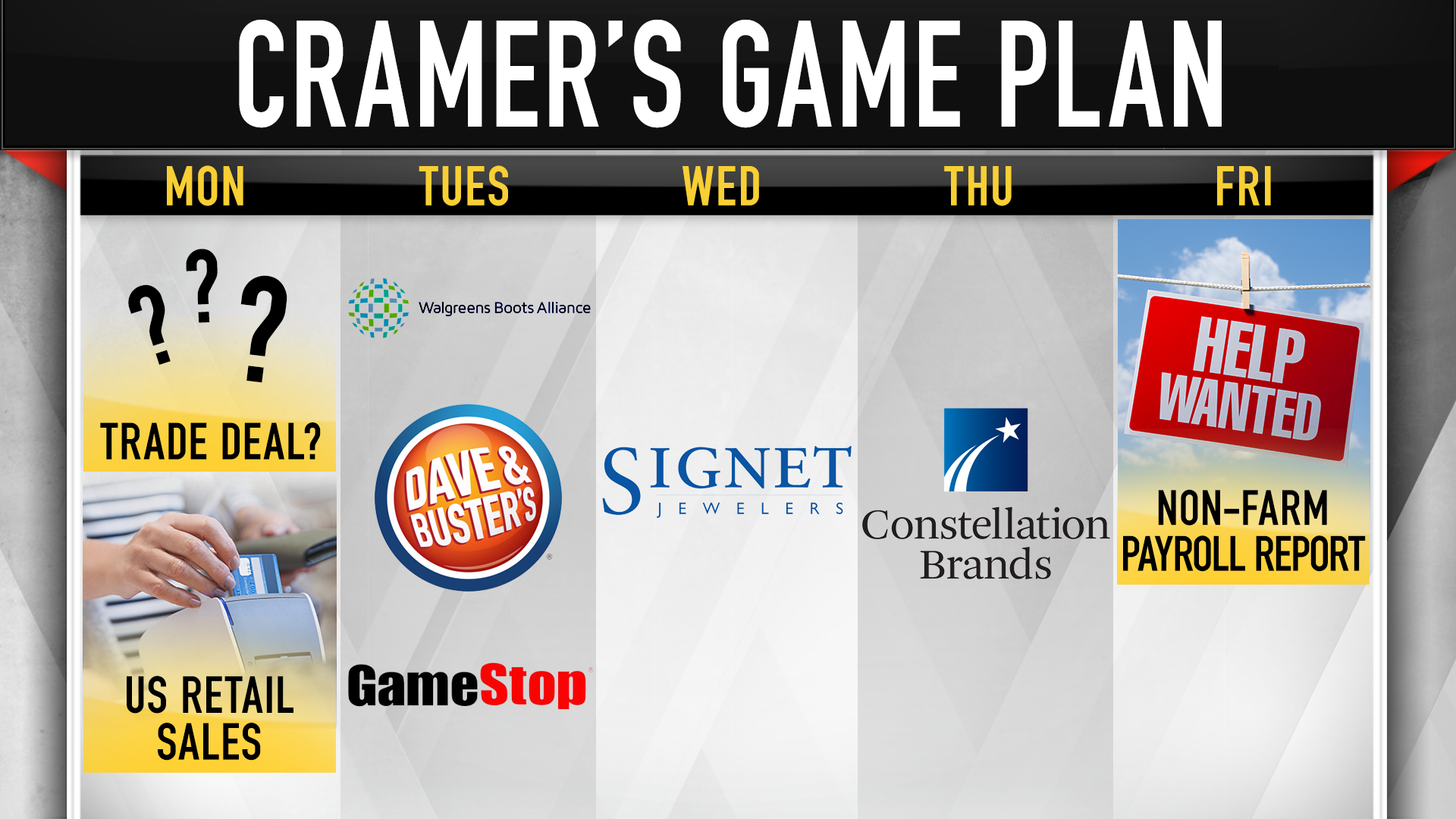 China trade deal: Monday kicks off another week of speculation about a trade deal between the U.S. and China — the largest economies in the world.

“If we make a deal with China, of course the stock market will soar,” Cramer said. “If not? Given that today’s rally was partially fueled by positive chatter from our negotiators, I think we’ll go right back down without some sign of progress on some breakout in the China front.”

Retail data: If retail sales results top expectations, it will produce positive shock as much as the latest reports was negative, and strong data could eliminate the inverted yield curve, the host said.

Walgreens: Cramer said Walgreens could miss expectations and guide down as CVS did. Drug stores are having a tough time competing with Amazon and other retailers, he added.

The results will be released before the market opens on Tuesday.

Dave & Buster’s: Cramer said he likes that the restaurant and entertainment chain is expanding outside of the malls, but he is cautious about buying the stock here. The stock price may already reflect its strength, he said.

GameStop: Cramer said he is not “keen” on the dwindling franchise.

Signet Jewelers: The diamond retailer will give its latest earnings before trading begins Wednesday. The stock has brought pain to shareholders, so don’t touch it, Cramer said.

The stock sold off, but the host believes the company is preparing to compete in the cannabis space after making a $4 billion play for Canopy Growth and that makes it the best of its group, he said.

Labor Department employment results: The non-farm payroll report will be “ridiculously important” because people are worried about a recession, Cramer said.

European businesses are rethinking their plans for a ‘closed’ China
Celsius has a Hail Mary bankruptcy plan: Turn its debt into a new cryptocurrency
Wall Street milestone: ETF popularity hits record number
Towns Where Million-Dollar Homes Are Practically The Norm
New retirees may face surcharges for Medicare premiums. Here’s how to appeal paying extra if your income has dropped