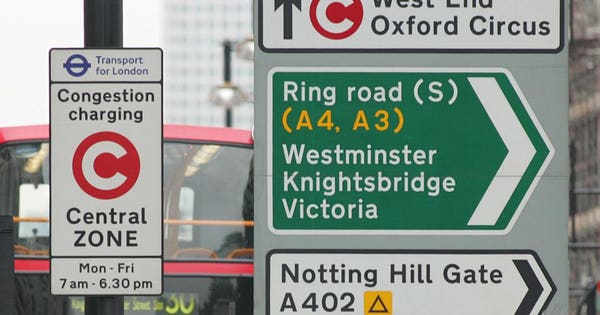 Road signs showing directions around central London and warnings about entering the Congestion Zone for which private motorists must pay a fee, near Marble Arch in London, Friday Sept 30, 2005. London’s Mayor Ken Livingstone on Friday confirmed that the city is expanding its congestion-charging zone for vehicles. Vehicles are charged 8 pounds (euro11.70 US$14.10) a day to enter central London, but starting in February 2007 that zone will include the west London areas of Knightsbridge, Kensington and Chelsea, Livingstone said. (AP Photo/Alastair Grant)

The city and state of New York have agreed to implement congestion pricing as from 2021 to try to reduce traffic jams in Manhattan.

Above is a photo of one of the access route to central Singapore’s Electronic Road Pricing (ERP) whereby vehicles are charged through a system of sensors and cameras that read license plates. Singapore has capped vehicle numbers, only allowing a car to be registered when another car gets retired, a system it pioneered in 1998. What’s more, registering a vehicle usually costs more than the vehicle itself, which means that barely 15% of the population now own a vehicle, making car ownership the preserve of the superrich.

Different forms of congestion charges are used by London, Stockholm, Singapore, Milan and Gothenburg to reduce traffic, some successfully and other less so: needless to say, the approach has its supporters and critics.

Most programs of this type charge a fee to enter city centers, such as the £11.50 a day to access central London, or are based on congestion levels, and are implemented through surveillance cameras, license plate recognition algorithms or devices in vehicles. The development of such technologies allow agile and error-free collection, making them an option for cities in search of solutions to traffic problems. In the case of London, for example, the number of vehicles in the city center fell by almost 40% between 2002 and 2014, and while critics say it needs to be updated and extended to take into account greater traffic levels in the rest of the capital, it has generated substantial revenue that has been spent on improving infrastructure and public transport.

Simple economics says these kinds of initially unpopular tariffs make drivers aware of the costs they impose on a public good during peak demand, a public good they would otherwise take for granted and mean they must make more rational decisions about how and when to use their cars. Congestion charges help reduce congestion and encourage people to use public transport.

Critics often say they are unfair because they punish the poor or penalize people who live in the suburbs, but such schemes are growing thanks to automated toll systems and are under consideration in the United States, China and Brazil. New York is expected to generate around $ 1 billion a year, money that will be spent on public transport and thus provide alternatives to the use of private cars.

Congestion charges will help define the future of cities where privately owned cars have become a public enemy, causing problems that have long been ignored. Initially car owners will oppose them city: all taxes are unpopular. But if you live in a city where a traffic congestion charge is being discussed, then get ready: the days of driving where, when and how you wanted are over. A sign of the times.

Bed Bath & Beyond is closing about 150 stores. Here’s a map of ones on the list so far
Ford stock suffers worst day since 2011 after cost warning, shedding $7 billion in market value
FedEx hikes package rates, details cost cutting as demand weakens globally
The most common crime in UK hotels isn’t theft
Here’s how many people will get student loan forgiveness in each state