When the credit card company says no, the “bank of family” just might say yes.

Given a choice between maxing out a limit on a credit card or taking a loan from a family member, lower-income households and people of color are more likely to turn to relatives, according to the CNBC Invest in You and Acorns Savings Survey.

Among participants with household income below $50,000, more than half said they would ask to borrow from a family member.

Further, 51 percent of black participants who took the survey said they would ask a relative for a loan, while nearly 6 out of 10 Hispanic respondents also said they would prefer to turn to family.

The survey was conducted for CNBC by SurveyMonkey in March among a national sample of more than 2,300 adults. 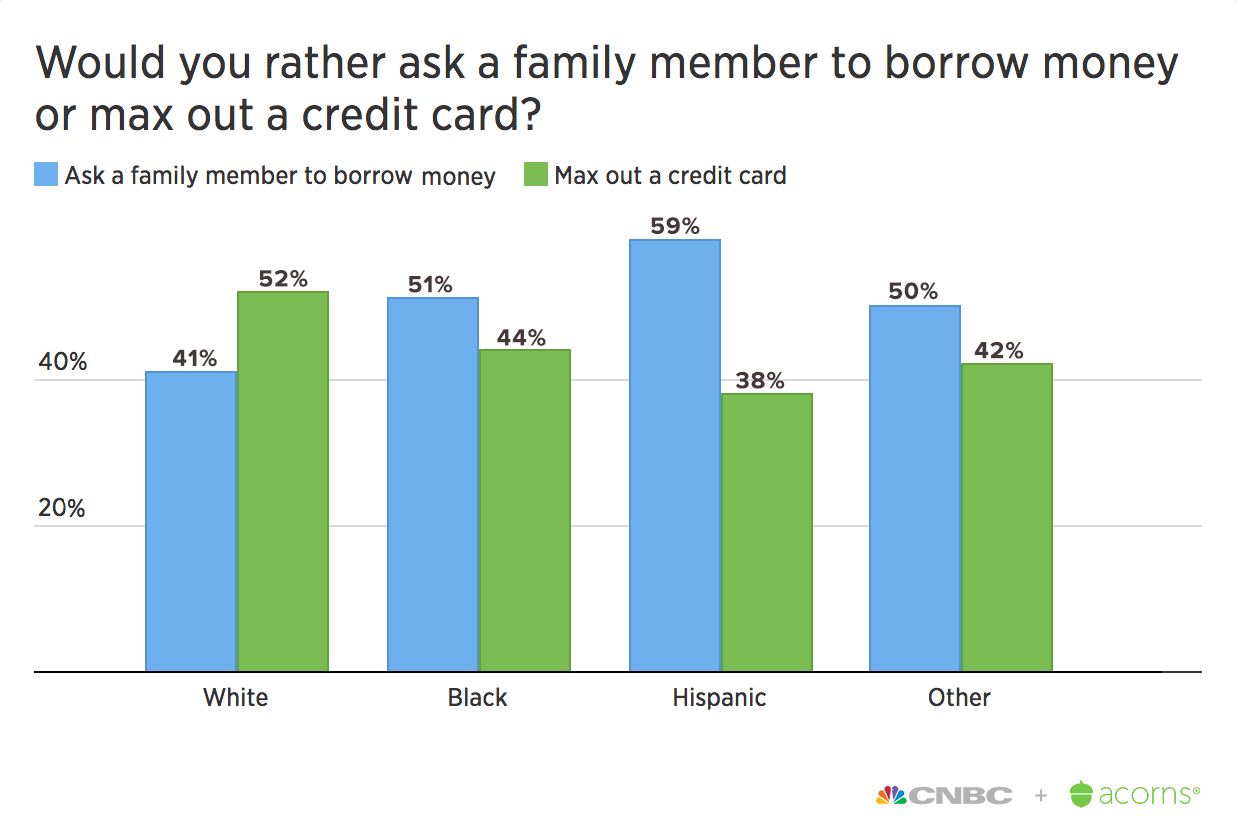 White participants and higher-income households were more inclined to max out their cards. More than half of the people in both cohorts said they would prefer plastic to borrowing from relatives.

Perhaps the biggest upside of taking a loan from family is the fact that costs tend to be lower. The average interest rate on a credit card is now 17.67 percent, according to CreditCards.com.

“Going to a family member might be a knee-jerk reaction,” said Louis Barajas, a certified financial planner at Wealth Management LAB in Los Angeles. “They won’t charge any interest.”

But these loans can also carry risk for both lenders and borrowers. 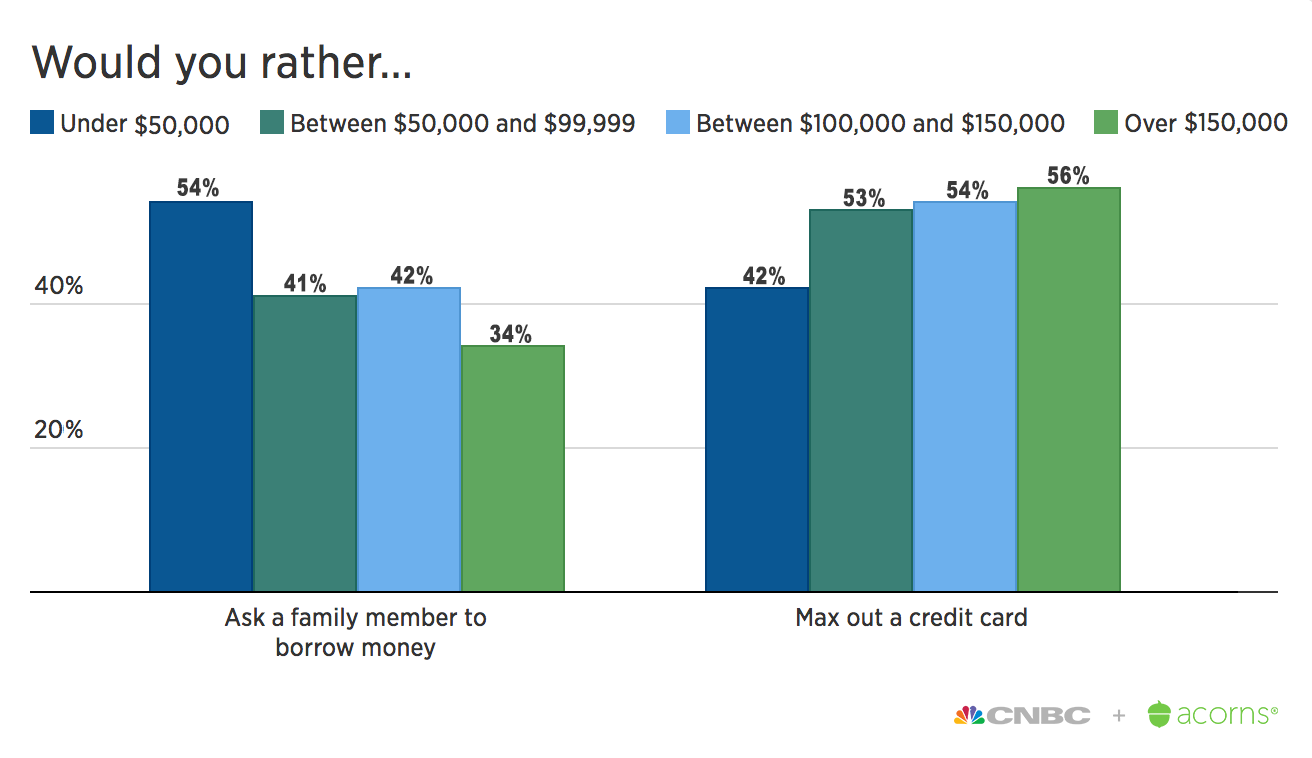 “The person who’s funding the loan is making a financial decision based on emotion,” Barajas said. “‘It’s my daughter, it’s my niece.'”

Here’s how to navigate a family loan without hurting yourself and your relatives.

“We can look at a lot of studies that show black and Hispanic people being turned away for even small loans,” said Rianka Dorsainvil, a CFP and founder of Your Greatest Contribution in Lanham, Maryland.

Indeed, people of color make up a large share of the population that don’t have access to checking or savings accounts. In all, about 8.4 million U.S. households were unbanked in 2017, according to data from the Federal Deposit Insurance Corp.

More from Invest In You:
Are you smarter than a 5th grader (when it comes to money)?
This simple banking move can multiply your money
Figuring out your net worth isn’t just for the 1 percenters

The unbanked rates for black and Hispanic households were about 17 percent and 14 percent, respectively, the FDIC found.

Meanwhile, unbanked rates were 2.5 percent for Asians and 3 percent for white families, according to the FDIC.

“Instead of turning to a financial institution, they’d rather turn to a family member,” Dorsainvil said of people of color.

While your parents won’t report you to the credit scoring companies for failing to make timely repayments on your loan, you risk burning bridges with loved ones.

“There are long-term implications on both sides,” Barajas said. “You’re going to see disharmony among family members who don’t pay them back.”

Further, while first-generation wealth builders feel the pressure to bail out relatives experiencing hard times, being too generous will damage their own finances.

“This is like survivor’s remorse: ‘I made it. Nobody else did, and I feel like I have to help everyone,” Dorsainvil said.

“I see it with first-generation immigrants who start earning a great salary,” she said. “Family members want to borrow from them, but we know that ‘borrow’ really means ‘give.'”

That’s why it’s important for prospective lenders to bolster their own finances before they start making loans to family.

This means you should have a plan in place to save for retirement, pay off student debt and reach savings goals, Dorsainvil said.

Whether you’re the lender or the borrower, the best way to approach a loan is to be open and honest throughout the process.

Here’s where to start:

• Is it a loan or a gift? Relatives should only lend what they’re willing to lose. “See it as a bad investment,” Barajas said. “Can you afford to lose the money?”

Both parties should also set expectations from the beginning. Is this a loan that must be repaid or is it a gift?

• Draw up a budget: Lend only what the borrower can afford to repay. “There needs to be some education,” said Dorsainvil. “Ask, ‘Do you have a budget?’ You want them to be on their own two feet.”

Borrowers should demonstrate that they have the cash flow to repay the loan within a specific period of time.

• Make it official: Put everything in writing, including the amount borrowed and an agreed-upon payment schedule. It will hold both parties accountable.

Disclosure: NBCUniversal and Comcast Ventures are investors in Acorns.

Everything parents need to know about student loan forgiveness
In N.Y. Attorney General’s Trump Complaint, Lots Of Fraud But Not A Lot Of Tax Avoidance
Olive Garden sales fall short, but parent company Darden stands by outlook
As 30-year mortgage rates hit 6.7%, homebuyers are facing ‘payment shock.’ Here are ways to save
Bitcoin briefly drops to its lowest level in 3 months as risk assets continue to get crushed