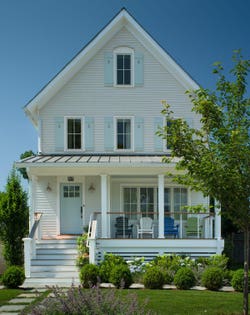 This panelized house is located n Westport, Connecticut. The house was designed by Sellers Lathrop Architects LLC. The panels were manufactured by Bensonwood and the house was built by The Pratley Construction, LLC.

Panelized construction is on the increase in this country and around the world. It has become very popular for a variety of reasons. There is a lack of skilled labor, people willing to work outdoors in sometimes difficult weather conditions. Building panels in a factory is far more ideal, in a protected work environment. Wood that is sitting out on site can get wet and later twist and buckle after the house is built. On-site construction is dependent on local weather conditions. This is not true for panelized as well as other prefab types of construction.

This panelized house with post and beam construction, in Serenbe in Chattahoochee Hills, Georgia. More about the Serenbe community can be seen in my recent article on the community.

In prefab factories, there is access to more sophisticated tools and machinery, speeding up the production time, with little dependence on the weather, no waiting for professionals to appear at the job site and less waste and pilferage of materials. Ultimately there is also a cost savings in time, labor and materials.

Panelization is also an environmentally friendly way to build. Instead of filling up Dumpsters with debris on site, cutoffs of wood and other materials can be recycled and used for other projects in the factory. Drywall and wiring that is not being used can be returned to the manufacturer and recycled. Often factories offer the wood they cannot use to the community to use for their fireplaces and wood stoves.

Located in East Hampton, New York, this Yankee Barn Home is panelized with a timber frame.

Photos are courtesy of Yankee Barn Homes for Prefabulous World, published by Abrams

An early study performed in 1996 demonstrated the advantages of panelization. The study was called Framing the American Dream. Two identical houses were built side by side; one was site built and the other was panelized. In the study they found several remarkable statistics, including a 75% reduction in man-hours to frame, 25 percent reduction in the amount of lumber, 75 percent reduction in scrap generated.

The green (r)evolution Plus Energy House is a panelized house in Cologne, Germany built by Huf Haus. In spite of all the glazing, this house is extremely energy efficient.

The Camden Passihaus is located in London, England. This panelized house with a timber frame is certified Passihaus, and designed by bere:architects.

Prefabrication is being used for a large percentage of houses today in the United States and around the world. Sometimes it is not for the complete house but for a part of it, such as with the use of prefabricated trusses.

My continuous mantra is prefabrication is the future of homebuilding because of the many advantages to panelization and the various other prefab methods. A common arguments is: Would you ever consider having the parts of your car delivered to your driveway so that you or a local contractor could put it together? Most people would agree that they prefer the experience and expertise that comes with a factory built car.