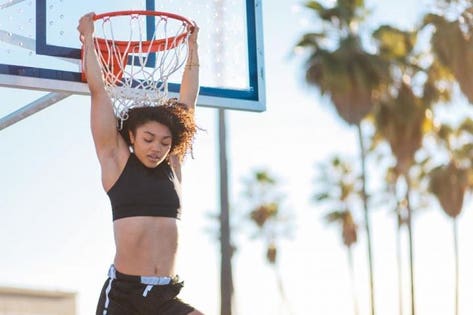 Young woman practicing basketball near the Venice beach in Los Angeles, California. She is having a great time, slamming the ball in the sunset hours.

Here’s a question for you if you watch basketball on even a semi-consistent basis. How many times have you heard those three lines stated right in a row? And, beyond that, how many times could they be said?

Quite a few considering the nature of the high-scoring game, no matter whether we’re looking at college or pro leagues.

Bump it up to the pro level then, and you’ve easily got scores that top 100. Multiply that by two teams, and that’s a lot of driving, shooting and scoring we’re talking about.

In basketball, such big numbers might be expected, but try comparing them to every other recognized sport out there.

In football, an average NFL game will see the winner with 29 points. And as of December 2018, at least, the National Hockey League has only ever seen one recorded instance of a team reaching 16.

Baseball… soccer… tennis… lacrosse… When it comes to action-packed scoreboard results, they just cannot compete. In the arena of racking up points, basketball is bound to win every time.

All this talk about basketball scores reminds me of a line from a Key & Peele skit.

In it, the two comedians pretend to be basketball commentators, only very candid ones, getting about as literal, honest and – of course – snarky as they possibly can about what goes on in a typical basketball game.

Once the action begins, they “stop stalling with the mindless chatter” and start explaining what’s happening on the court, such as how “the legal giant easily puts it into the basket, making it look easy. Which, when you’re seven feet tall, it is.”

Now, amusing though that skit may or may not be – to each their own, of course – that punch line obviously discounts a lot.

It discounts the hours and hours of practice those players put in to get where they are, plus the sacrifices they made with their time, saying no to the easy route of hanging out with friends or staring blankly at the TV in favor of upping their game.

Goofing off wasn’t their norm. Their norm was practicing, practicing, and practicing some more to improve their jump shots, their free throws and their stamina… all in order to shoot a 9.5-inch ball into an 18-inch rim from up to forty feet out.

If that sounds like something just anyone can do, think again. It’s not.

And the same thing goes for dunking when you’re being crowded by three other guys whose whole goal in that moment is to get the ball away from you so that their team can score instead.

Then again, as Key & Peele commentated, these things do become easier when you’re seven feet tall.

Handicaps Are Meant to Be Overcome

Basketball enthusiasts reading this are no doubt scoffing about the seven-foot reference when “everyone knows” that NBA player’s average height is actually only about six foot seven inches. And, throughout the history of the NBA, there have been a few notable men who fell far under that stat.

So yes, height isn’t everything when it comes to playing basketball.

But it is something. For that matter, it’s something significant in the same exact way as a natural affinity for numbers will better qualify someone to be an accountant… An innate eye for detail is an automatic aid for someone who wants to work in an artistic field as a photographer or painter or interior designer…

And having millions of dollars to throw around in the stock market is an automatic aid for making more moolah.

Some people are born with that kind of privileged position, and it’s pointless to resent them for it. They didn’t get a say in what families they were born into any more than an NBA star gets to choose his height.

We only get a say in what we do with whatever we’ve been given. So if we want to play basketball when we’re not seven feet tall (or six feet seven inches), then perhaps we should just take the shot anyway.

And if we want to have a certain amount of money in our portfolios by the time we retire, then we’ll want to rely on solid slam dunks like these five below.

He Drives… He Shoots… He Scores!

Tanger Factory Outlet Centers, Inc. (SKT) is a mall REIT with 44 outlet centers offering 15.3 million square feet of gross leasable area in the U.S. and Canada. The company offers space to brand-name retailers: Food and services are an afterthought. Tanger’s success has much to do with its branding over 26 years, establishing “TangerOutlets®” as a source of popular labels at bargain prices.

Although Tanger was recently downgraded by S&P to BBB (from BBB+), the company has sufficient free cash flow in 2019 to reduce debt. The dividend’s well covered, increasing annually for 26 years (even in 2007-2008), so investors get paid to wait as Tanger re-tenants with retailers that thrive in an omnichannel environment. With free cash flow likely to remain in excess of $100 million per year, the balance sheet is conservatively levered, giving the company the financial strength to weather rent roll-downs and store closures for the next one to two years, or until the tenant mix is optimized.

CyrusOne (CONE) is set for growth in 2020 and beyond, with outsized potential for double digit returns. They’re a high-growth data center REIT specializing in highly reliable, enterprise-class, carrier-neutral data center properties in more than 45 mission-critical facilities worldwide, that protect and ensure continued IT infrastructure operation for approximately 1,000 customers – including over 210 of the Fortune 1000.

For 2019, CyrusOne expects to invest $400 million of the capex budget into EU and U.K. projects, to become competitive with powerhouse data players such as Digital Realty (DLR) and Equinix (EQIX). With the company planning no dividend increase this year, we’re taking the opportunity to purchase more shares more cheaply, expecting our “Strong Buy” thesis on this transformative data center REIT to eventually play to our advantage. Shares trade at $11.58 with a dividend yield of 8.1%.

Easterly Government (DEA) is an office REIT focused on federal government buildings, and the only “pure play” government-leased model with internal management. Easterly owns 65 properties encompassing 5.6 million square feet. Easterly sticks to critical missions of the federal government that don’t go out of favor – agencies such as the Federal Bureau of Investigation and Immigration and Customs Enforcement.

DEA’s debt profile is sound. As of Q4-18 debt was $791 million. Availability on its revolving line of credit $315 million. Easterly showed significant growth in 2018, successfully closing on 15 properties. Through December 2017, DEA was growing its dividend modestly, but the company opted to freeze the growth in 2018 (maintaining the annual payout of $1.04 per share). This was likely due to the elevated payout ratio, in excess of 100% based on AFFO.

We’re forecasting the company will begin growing the dividend again in 2020. Obviously, the elevated payout suggests DEA has a higher risk profile, but the government-backed leases provide us with SWAN assurance that the revenue is stable and predictable, and that’s one of the reasons we include this REIT as a Strong Buy. Shares trade at $18.15 with a dividend yield of 15.4%.

CIO’s sound debt profile has roughly six years average maturity, with over three-quarters of the debt fixed, mortgages with a mix of lenders, and seven assets unencumbered. In Q4-18, the company acquired four properties for $156 million (with a higher-than average urban population growth and lower cost of doing business). Portfolio occupancy is around 92%; and just 6% of rents are scheduled to expire over the next 12 months.

Like most new small-cap REITs, CIO has had to grow into its dividend (meaning payout ratio), which management has focused on since 2015. As it continues to locate more profitable growth opportunities, City Office believes it can achieve about 7.5% cap rates – a big AFFO per share growth driver, along with the fact some properties have average rents up to 20% below market. CIO’s valuation is attractive – hence our Strong Buy. Shares trade at $11.58 with a dividend yield of 8.1%.

Monmouth Real Estate (MNR) is an industrial REIT with 113 properties, across approximately 21.8 million square feet. Geographically diverse from coast to coast across 30 states – and substantial exposure to the East Coast – Monmouth focuses on major seaports, intermodal ports, and airports. Their exposure to FedEx is highly concentrated, with over 59.6% of annual rent and 48% of square footage leased to Fedex’s Ground, Express, and Supply Chain Services.

Monmouth’s capital structure includes approximately $898 million of debt. Around 86% is fixed rate with a weighted average interest rate of 4.1%., and debt maturity of 11.8 years at quarter end – one of the longest debt maturity schedules. The company’s total market capitalization is approximately $2.3 billion. In Q1-FY19 (ending 12/31/18), MNR generated “record high” AFFO per share of $0.23 per share, up 4.5% year-over-year, which resulted in a conservative 74% AFFO dividend payout ratio.

Our upgrade of MNR from hold to a Strong Buy is based strictly on valuation. We’re not been a fan of their REIT securities portfolio, but expect considerable price appreciation as FedEx bounces back, and we can capitalize on the discount being offered by Mr. Market. Shares trade at $13.56 with a dividend yield of 5.0%.

Disclosure: I own SKT, CONE, DEA, and CIO.

Integrating HECM Reverse Mortgages Into Retirement Plans
Robinhood jumps after report that SEC will not ban payment for order flow
Stocks making the biggest moves midday: Change Healthcare, Ford, PayPal, Humana and more
A Woman Becoming One Of The Few Presidents Of A Major Construction Company
Fed Hikes Rates By 75 Basis Points—Here’s Why It’s Not All Doom And Gloom For Investors