While hiring in the U.S. rebounded in March, baby boomers who are still in the work force are not doing so great.

Employment for people aged 55 and over dropped 209,000 last month, the biggest monthly decline since February 2015 when 251,000 jobs were cut for the age group, according to data from Bureau of Labor Statistics. 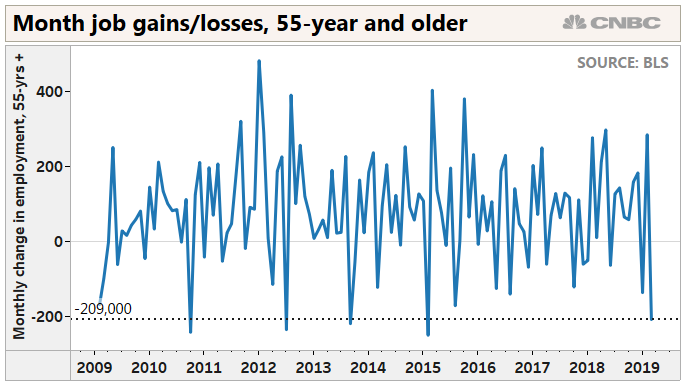 While the decline was notable, a one-month change hardly makes a trend. In fact, this age group still has the lowest unemployment level among all cohorts, with a 2.7% jobless rate in March unchanged from February. The overall unemployment rate held steady at 3.8% in March.

“This data tends to be volatile monthly. I don’t think it’s a start of a trend,” said Craig Dismuke, chief economist at Vining Sparks. “Broadly speaking, I think the labor market has been very good for people over the age of 55 and 65.”

“The Current Population Survey is a survey of about 60,000 households, and the sample sizes get small when one slices the data by age group and employment status. But the overall trends appear positive,” Pollak said.

Although the number can be volatile, several industries including government and educational services where the employment distribution skews towards older workers have seen “sluggish” growth lately, Pollak pointed out. 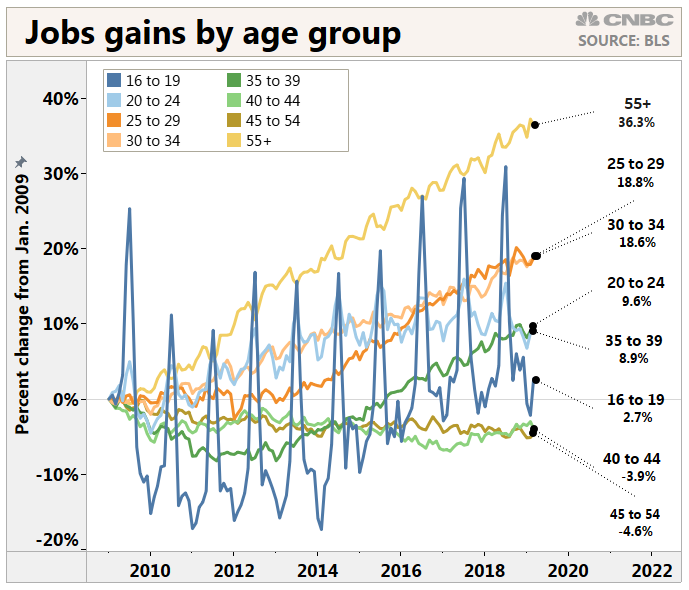 Baby boomers have been the biggest job gainers in the last decade. Many of them facing retirement tend to stay in the workforce partly because they fear they don’t have enough money saved up. President Donald Trump has also pushed for policies to encourage more Americans to get back to work as baby boomers retire.

“The broader trend is that the participation in 55 and over continue to rise,” Dismuke said. “I do think there’s an issue that people haven’t saved enough and they are forced to work longer. We have a smaller percentage of our jobs today [that] are manually taxing like they would’ve been 40 years ago,” and less physically demanding work allows people to work longer, Dismuke said.