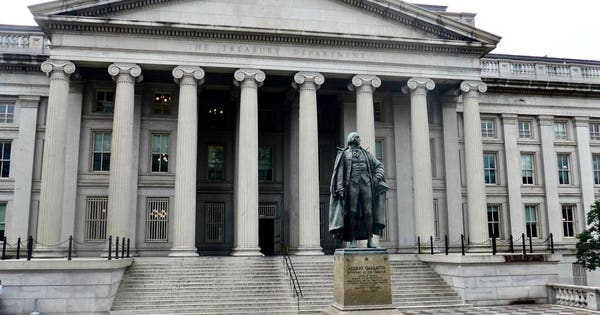 Bronze statue of Albert Gallatin (1761-1849), the longest serving US Secretary of Treasury, stands before the Treasury Department in Washington, DC.

The presenters did a very good job of providing guidance and examples on a number of 199A issues.

I will be covering these issues in an upcoming LISI webinar on Thursday, April 11, 2019, from 3:00 to 4:00 p.m., entitled “Breaking 199A Developments You Must Know About: Treasury Official Startles Practitioners with Respect to Separate Books and Records Requirement, Related Party Rules & “Crack and Pack” Complex Trust Strategies.”

Here are the most important takeaways from the webinar, written mainly for accountants and tax lawyers, but hopefully understandable by all readers who have a background in this area:

The first takeaway, which one of the Treasury lawyers apologized for was with respect to whether separate books and records would have to be kept by an entity that has both SSTB and non-SSTB activities and income. “SSTB” stands for Specified Trade or Business and includes such professions as Medicine, Law, Accounting, and Consulting. An example in the Regulations is that a company primarily sells lawn care and landscaping equipment, but also provides advice on landscape design for large office parks and residential buildings, which would be considered consulting. Because the consulting services constitute more than ten percent of revenues and separate or separable accounting records were not kept, the entire business is treated as an SSTB. In a second example, a veterinary (medical) practice treats animals, but also manufactures and sells dog food. The example explains that the company separately invoices for the dog food sales, has separate employees that are unaffiliated with the veterinary clinic, and maintains separate books and records for the dog food sales.

While the above-referenced example in the Regulations indicates that the practice keeps separate books and records, it is apparently sufficient that the practice would keep one set of books and records but would be able to separate out the incoming deductions attributable to each of the two separate businesses. As a practical matter, there must be some degree of segregation in order to determine what the taxable income derived from each separate business will be.

Quite possibly, the drafters thought that the 446 regulations required separate books and records and then realized after January 18th that they do not. Until further guidance is issued on this matter, it seems safest for taxpayers to maintain separate books and records for SSTB and Non-SSTB income, even though under a literal reading of the Final Regulations would only require that they be “separable”.

The second takeaway is that the Webinar confirmed that when multiple entities taxed as partnerships or S corporations are all in the same business and under common ownership, they cannot be aggregated for purposes of determining whether there is enough activity and financial risk to constitute “an active trade or business” under Internal Revenue Code Section 162.

This is important because the Final Regulations indicate that in order for income to qualify for the Section 199A deduction, there must be an “active trade or business” as defined in Code Section 162, which requires that the applicable entity or individual takes on the risks and rewards of running a trade or business and has sufficient activity that is reasonably necessary to run the trade or business.

The case law under Section 162 goes back for many decades and for example, generally provides that simply collecting a rent check and verifying insurance and maintenance compliance in a typical triple-net lease arrangement will not arise to the level of an “active trade or business” even if the landlord is taking on significant financial risk.

The third revelation from the ABA webinar is that income distributed from a complex trust to a beneficiary will be aggregated with the income remaining in that trust and with all income of the grantor of the trust for purposes of determining whether the $157,500/$315,000 thresholds are met, where income is from an SSTB or a trade or business that does not have sufficient wages or an adjusted basis from Qualified Property.

This situation arises when high income taxpayers have SSTB income, or trade or business income, and cannot qualify for the Section 199A deduction but have relatives or close friends who can.

In that situation, the high income taxpayer could gift or sell part ownership in the trade or business entity to a child, grandchild, or other lower income individual who would be able to take the deduction.

The third takeaway focused on trusts that are separately at their own brackets, which are referred to as “complex trusts” and may qualify for the Section 199A deduction when a high income owner of an SSTB or entity not satisfying the Wage/Qualified Property test transfers ownership to a trust with income below the threshold limitation, unless the trust was established or funded for a primary purpose of “avoiding, or of using more than one, threshold amount for purposes of calculating” a Section 199A deduction, in which event the Regulations indicate that the trust will be disrespected as a separate trust entity for Section 199A threshold amount purposes.

An example discussed in the webinar is as follows:

The Regulations do not indicate that income, which is distributed from the complex trust and would otherwise be taxed to a beneficiary, will also be aggregated with the grantor of the trust, and it is not clear to the authors as to whether the language of the regulations actually accomplishes what the Treasury lawyer indicated to be the apparent intent.

The above-mentioned example also explained that if the gift was directly to the son, solely for the purposes of qualifying income for the Section 199A deduction, then the anti-abuse rule would not apply.

As a result of the above, more tax planners will recommend the use of a Section 678 trust, which enables all of the income earned by the trust to be taxed as if it was actually earned by an individual who had the right to make a withdrawal of all principal or income from the trust, as described in our Section 678 Forbes blog post, 678 Ways to Qualify for the 199A 20% Deduction.

These new views came as a surprise to many of us, and show that the process of writing and understanding regulations on short notice is an inexact science at best. Hopefully some of these views will change over time after consideration that the actual language of the Final Regulations does not seem to support all of these positions.