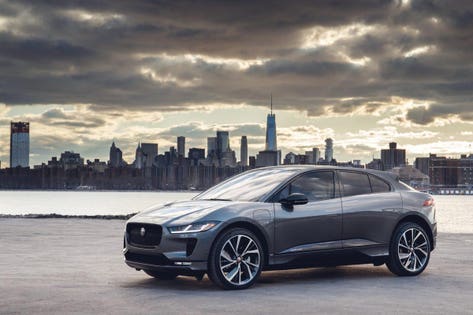 Before I take the wheel of the all-electric Jaguar I-Pace (MSRP $85,900), I slide into the back seat to get a feel for the legroom. From the outside, the I-Pace is a futuristic, compact SUV that sits lower than some competitors at 5 feet 2 inches—the Tesla Model X is 5 feet 6 inches high and Volvo’s XC40, which stands at 5 feet 5 inches, will be joined by an all-electric version later this year. So, while it’s boldly designed eye candy from the outside (including the sleek, retractable door handles), it’s inarguably on the smaller side. Go inside, however, and the I-Pace tells a different tale.

Since it doesn’t have a traditional engine in the front, the I-Pace is designed with a shorter nose and longer wheelbase and the two-row interior has been configured to maximize all available space. There’s a fixed panoramic roof that extends the openness of the five-seater cabin and extensive legroom in both front and rear. The rear roominess draws accolades when a lanky friend who’s well over 6 feet tall rides with me for a few hours. He fits easily, though adding two adult passengers tips the scale from comfy to a tight squeeze.

There’s also convenient storage from end to end, from a trunk that adequately stores your weekend getaway bags and an unexpected front storage space tucked away under the hood to compartments under the center console and rear seats.

The first thing I notice when I turn the I-Pace on is the uncanny silence. Nary a sound. There’s no indication from the electric engine that the car is on—or off, for that matter— although there is a simulated roar when you floor the gas pedal. Instead, the display screen and instrument panel come to life, allowing for everything from climate and media control to charge stats. It’s not a complex system, though I do opt to use my phone’s navigation app to avoid the Jag’s more painstaking process.

The interior displays all the usual Jaguar touches, including premium leather seats, adjustable ambient lighting and customizable seat settings. It’s worth noting that while the gear selectors are conveniently located in the center console, my gaze skims past the park button a few times before it’s locked into my mental map.

On the road, the I-Pace is an agile, sporty ride, nimbly skirting around city traffic and assorted potholes and gliding smoothly over my neighborhood’s over-surfeit of speed bumps. The vehicle’s height, by the way, can be manually adjusted between access, normal and off-road modes. It also automatically adjusts when in motion, such as on the highway when the suspension lowers to maximize aerodynamics.

This 394 horsepower First Edition (in a striking photon red, no less) deftly rockets off with a touch. Before you know it, in four and a half seconds to be precise, you’ll be hitting 60 mph while some of the competition is still getting warmed up. There’s the 234-mile range, which should comfortably float urban commuters through the better part of their work week.

Now, about that range.

I downloaded ChargePoint, one of the apps suggested by Jaguar, that lets you quickly set up an account to use charge stations around most cities. You can select the type of station required—if you’re on the go, you’ll want the DC fast charger stations that will give up to an 80% charge in 40 minutes, according to the manufacturer. I learn this critical recharging lesson the hard way.

When I first drive the I-Pace, it’s 70% charged, but since I end up launching an impromptu rescue mission for a stranded friend in stop-and-go traffic, it’s down to 40% within a few hours. On day two, after running a few quick errands and blasting the heat through the vents, the I-Pace’s charge is wearing down significantly until it’s wavering  around 20%.

The ChargePoint app directs me to a few charging stations, but it takes three attempts to find one with public access (the app also keeps tabs on the availability of individual pumps). I plug in, make sure the cable has automatically locked in place to prevent removal and head to dinner.

I return an hour later, filled with food and optimism. Welp. This charger gave me all of a 5% boost. Time to limp home to use a domestic 120V socket for an overnight charge, which the brand estimates will provide a scanty 30-mile range.

My thoughts? The I-Pace is a fun and functional ride. If you’re bringing it home, minimize the anxiety and inconvenience of charging on the go by investing in a home charging system that provides a full charge overnight. And do some research before zipping off on any off-the-grid weekend getaways.

European businesses are rethinking their plans for a ‘closed’ China
The labor market is still hot — for now. Here’s what to consider before switching jobs
A Woman Becoming One Of The Few Presidents Of A Major Construction Company
HSBC warns investors to avoid European stocks
Ford warns investors of an extra $1 billion in supply chain costs during the third quarter