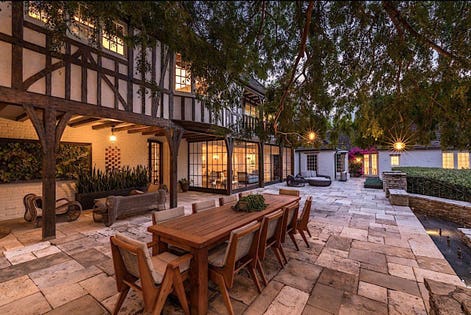 The couple lived in the home for about three years.

The architecturally-significant Beverly Hills home that former couple Brad Pitt and Jennifer Aniston spent three years restoring is about to come on the market for $56 million, as the Wall Street Journal reported. The couple purchased the home for about $13 million in 2001 and sold it in 2005 (after their split) to its current owner, hedge fund manager Jonathan Brooks. The home’s provenance dates back to the 1930s when architect Wallace Neff, known for developing a signature ‘California Style’, designed the house for actor Fredric March and his wife, actress Florence Eldridge. Neff is also the famous name behind the 5-bedroom guest house on this $245 million listing, currently one of the most expensive listings in the country. Another owner was Wallis Annenberg (philanthropist and heir to the media tycoon Walter Annenberg) who in turn sold it to entertainment lawyer Ken Ziffren, from whom Pitt and Aniston purchased the property. It sits next to the James Bond-style house that billionaire James Packer purchased last year, which had previously belonged to actors Danny DeVito and Rhea Perlman.

Only a few photos have been released thus far, so there’s a quick tour to take of the interiors. Part of the Pitt-Aniston renovations included adding underfloor heating in the kitchen’s marble floors. As seen above, the white squares in the checkerboard pattern match the marble countertops and are subtly balanced by the subway tiles on the walls. Both recessed and pendant style lighting brighten up the space.

Adjacent to the kitchen is this classic dining room, with a penny tile surround for the fireplace. Large windows look out onto the grounds.

According to the Journal, the couple imported the wood floors from a 200-year-old French château for the room that acts as a bar/pub room. Stacked stone walls add another layer of vintage authenticity and the open shelving for storing wine completes the look.

The current seller added a tennis court a separate guest house that appears to be of midcentury modern design.

A small backyard pool with high privacy hedges is in the backyard.

This exterior shot above shows the characteristic Wallace Neff aesthetic with its Mediterranean flair and wide steps that lead to the house. The use of stacked stone creates a way to define the entryway while still blending in with the natural surroundings.

The property is not yet publicly listed, but agent Susan Smith with Hilton & Hyland is representing the property.