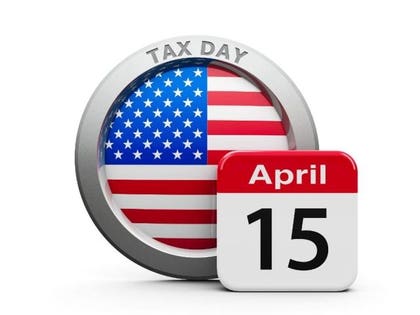 Taxes must be filed or extended by April 15.

You can learn a lot about current government thinking from tax policy. For example, the 2017 tax law changes loosened taxes on estates when someone passes away, and reduced tax liability for luxury cars and planes. Yet, it increased taxes on big taxing states (coincidentally mostly blue states) by reducing the amount of state and local taxes you can deduct from your federal tax bill. Can you feel a bit of political agenda in some of those decisions?

The list goes on and on. It goes on so long, in fact, that most human eyes just glaze over and they let their accountants handle this boring stuff. While it’s always better to file your taxes on time than not file, it’s still important to do some of the work yourself so that you can begin to understand what gets taxed and what doesn’t. After all, if you’re in, say, a 30% tax bracket, every dollar you can spend that isn’t taxed saves you 30¢. Do you know how hard it is to make 30% on your investments? That starts to add up of you’re talking about ten, twenty, a hundred thousand bucks.

I’ll be writing more about tax strategies for creatives in this column in the future, but for now, here are a few pieces of advice:

When in doubt, extend. A tax extension is ridiculously easy, and takes the pressure off until October 15. If you’re like most creatives, you’re likely a big procrastinator. A tax extension can be a godsend. Think of it as a Brexit delay for your financial life. It’s no free lunch, though. You still need to estimate your tax and send a check with the completed form.

Make an appointment with yourself. Book an afternoon to go through your taxes. Tell yourself that you’re only doing a rough draft, not the final pass. Gather all the receipts you need, but don’t let anything stop you from spending a few hours getting a first pass done. Once you’ve got that done you can engage a tax preparer for a few hours at a low hourly rate. And, if you’ve extended, they’ll have more time to deal with your unique situation away from the April 15 crunch. I recommend doing this in May, after the accountants of the world have returned from their post tax-day bacchanalia and they’re again ready to look for loopholes like a waking lion scouring the serengeti for a carcass.

Make tax day resolutions just like New Year’s resolutions. Did you pay too little this year? Too much? Did you forget to get receipts for charitable giving? Did you fail to fund your 401K? There’s always something more that you can do to reduce your taxes. Once you’ve finished calculating and filing, make a list of two or three items that could reduce your tax bill next year.

Are America’s Downtowns Coming Back?
Bitcoin briefly drops to its lowest level in 3 months as risk assets continue to get crushed
FTX in talks to raise up to $1 billion at valuation of about $32 billion, in-line with prior round
IRS Tax Collections Are Way Up Even Without 87,000 New IRS Agents
Streetwear Brand Lonely Ghost Opens Up Second Grocery-Themed Retail Location